Ground Penetrating Radar Systems, LLC, is Houston’s largest company specializing in the detection of underground utilities and the scanning of concrete structures. GPRS has an extensive nationwide network of highly trained and experienced technicians in every major U.S. market. When clients hire GPRS, they have the peace of mind of knowing that they have the most reliable scanning technology on their job site and they'll receive the assistance of a technician who can provide them with the most accurate data. For over a decade, GPRS has been the industry leader by providing outstanding service and cutting edge technology, keeping projects on time, reducing safety risks, and putting our relationships with our clients before profit.

To ensure the overall timely success of your project, utility detection is critical to any construction project where subsurface excavation is planned. If this critical first step is ignored, the risk for injury increases, budget overruns can multiply, and your schedule can be delayed.

Whether it's a renovation project or new build construction, the likelihood of needing to cut or core concrete is high. There is an inherent risk of striking rebar, conduits, and post tension cables during the cutting or coring process. If a striking occurs, repair costs begin to add up, delays creep into your schedule and it creates a safety hazard for your employees.

A water leak detection company that you can rely on, the GPRS team is here to help. We specialize in industrial, municipal and residential leak detection services. We’re experts in underground water leak detection, and our water loss specialists can quickly determine the root cause of the issue and recommend the appropriate fix. In many instances, including emergencies, we will utilize non-destructive testing (NDT) detection methods, including leak noise correlators, to avoid excavation, saving you money and time.

The goal of the GPRS Deliverables Department is to deliver clear and understandable findings with each of our outputs from field markings to field sketches, KMZ files, or CAD drawings that provide 2D site plans or even 3D CAD models. In addition, upon the completion of every project, our customers receive a job summary that includes job scope information, site photos, description of site conditions, equipment used, and notes from the project. 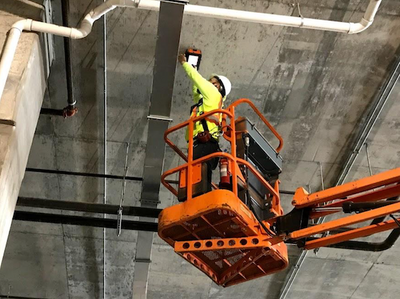 Prior to drilling and installing over 100 anchor and concrete core locations for new plumbing, electrical and HVAC systems, a local general contractor subcontracted Ground Penetrating Radar Systems, LLC to scan and locate post tensioned cables throughout the entire store. The contractor knew that the concrete slab on the floor and ceiling contained post tensioned cables and wanted to avoid them for the duration of all drilling. This was the contractor’s first time working with GPRS and after asking around other general contractors, many other companies referred GPRS as their go-to concrete scanning company. Since the anchor locations were on the ceiling, GPRS also rented and provided an aerial lift with certified Project Manager’s for the duration of the project. After mobilizing to the jobsite, the Ground Penetrating Radar Systems team was able to locate multiple post tensioned cables and conduits running in the floor and ceiling slabs. 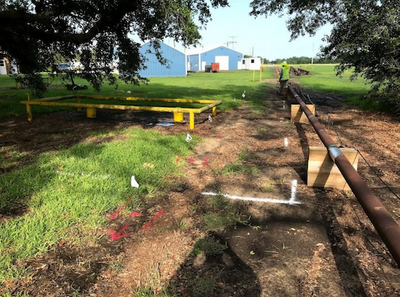 Ground Penetrating Radar Systems was contacted by a special services contractor in the Houston Metro area to conduct a private utility scan in an area of concern at a local ExxonMobil facility. The contractor needed to excavate around some existing water valves for some underground maintenance on the water lines coming from these valves. Part of the facilities ground disturbance regulations was to call in a private utility locate to minimize any damage or dangers during this operation. Enter GPRS, the largest provider of private subsurface locating in the country. Within 24 hours, the Houston branch of GPRS mobilized to the site to conduct the locate. When GPRS arrived on site, the site contact for the contractor walked us to the area of concern and pointed out all the potential issues. Right away, we were able to determine that the area was going to be highly congested with pipelines, water lines and electric conduits based on just basic observation of aboveground indicators. GPRS conducted the scan using a 350Mhz GPR antenna and RD8100 electromagnetic pipe locator.